I have a lot of friends across the country, and something is about to happen in Chicago that will get national attention: a strike in our public school system. This likely will be brought up by Trump or Clinton at some point. The circumstances that got us to another teachers’strike are complex. Before someone highjacks the issue on the national stage, I thought it’d be worth a relatively short explanation. So, if you like to be informed, read on:

One part of the break between the teachers and the city is about pension payments. About 25 years ago, the city made a deal with the teachers to pay a much larger chunk of their shared pension costs in lieu of a raise. The pension is a critical part of the pay package for a teacher in Chicago, since the city doesn’t pay into Social Security — so the teachers don’t get that — and there is no 401k savings through the city, like you’d have at most large companies. The pension is what the teachers will have to retire on, unless they’ve been able to save in an IRA out of their own pocket. Teachers in Chicago aren’t rich…I make more at my truck driving job, even after a huge decrease in hours the last 18 months, than about 90% of the teachers. Teaching is a solid middle-class living. So the teachers’ union isn’t soaking the city in some kind of unfair deal. There are many details I’m leaving out, but this post will be long enough…

The city, being Chicago, skipped so many payments into the pension for so many years, and it’s required by law to have a certain level of funding for the pension, that now the city can’t catch up without massive cuts or taxes. So they want to make the teachers pay much more into their pension, essentially taking away the one way teachers can retire safely. The city’s financial mismanagement is now the teachers’ problem, and the city wants to guilt them into giving more to their pension, without any additional benefit. It’s not the teachers’ fault the city blew this, and it’s not the teachers’ problem to fix. Especially because:

Chicago is broke on purpose. We have the money to fund pretty much whatever we want, but we hide it. The main scheme? The Tax Increment Financing fund, or TIF. This plan hatched way back in 1977 works like this: the city sets up a zone, a TIF district, in a “blighted” neighborhood, and within those boundaries any property tax increase for 23 YEARS IN THAT ZONE goes into a fund controlled by the mayor. Example: your property taxes are $5000 this year. In two years, they go up to $5700. The $700 increase goes into the TIF fund. And in 23 years, if you’re paying $15,000 in taxes, $10,000 goes into the TIF fund. The money in the TIF fund is supposed to be used to help poor neighborhoods in the city, and TIF zones are supposed to only be in poor neighborhoods.

But you know what happens? The city creates TIF zones all over the place, like freaking DOWNTOWN. There is no precise law saying that the money taken out of a poor neighborhood has to be used in that neighborhood. So, neighborhoods like Englewood, a very poor black neighborhood, get about $0.15 on the dollar back TIF investment in their neighborhoods. The rest is spent however the mayor wants. The money in the TIF fund is not in the city’s general budget, it’s reported in a very complicated way, so that it takes a local private citizen who is motivated (God bless him) some months to add up how much is really in this fund.

It’s a little over $1 billion.

Also realize that when you’re taking property tax increases and shifting the surplus into a fund, instead of where it usually goes, all those other governmental services suffer. So, the schools get almost exactly 50% of our property taxes, and that’s how we fund our schools. The parks get a share, and so on. When there are over 100 TIF districts (!!!) in the city, that means all the property tax increases for DECADES are not going to where they need to go, like schools and parks and anything else a city pays for. It goes into the TIF slush fund.

So we have in Chicago more than $1 billion, off the books, to use however the mayor wants. But this money — if the schools get 50%, at least $500 million — should have gone to paying for things we need. Chicago is broke on purpose. It’s like having a huge secret savings account, but not using it to pay your bills when you run out of money in checking. So you declare bankruptcy and stiff your creditors, but you still have all this secret money.

— The last point is crime and schools, and where they intersect. The violent crime rate in Chicago started going up when Rahm closed 50 public schools four years ago. Though declining enrollment was the stated reason, the real reason was the city wanted to replace the union public schools with charter schools. Rahm’s campaign manager for his first run in 2010 was the president of of a huge local charter school chain.

Charter schools can keep up to 25% of their funding as profit, i.e. “overhead.” They can also pay teachers much less money for longer hours, hide their finances because they’re “privately run public entities,” and kick out all the bad kids to the public schools. Look up John Oliver for his takedown of charters, but for our purposes, the city closed all these schools, almost all in poor black neighborhoods, then almost immediately announced we need a whole bunch of charter schools. In fact, on the day they announced the school closings, our alderman (O’Connor!) scheduled a neighborhood meeting (which everyone found out about by accident, they “forgot” to tell us in time, even though it’s the law) about a charter school he wanted to open in our neighborhood where he just announced the local public school was closing! This didn’t go well with the neighborhood, he backed off.

All those jobs lost, and all those safe spaces in bad neighborhoods we lost, when the schools were closed, is why we have out of control crime here.

— Finally, the backdrop of the election: Both candidates would do the same thing Rahm tried, closing public schools in favor of “choice,” which is code for breaking the union. But Rahm is a Democrat, and a long time Clinton friend and political ally. A bad strike here will make Clinton look worse, and also ruin Rahm’s chances to be a senior advisor in the White House, his getaway plan. So the stakes are high.

I’m not even getting into how the Rauner, and thus Rahm, want to tie teachers’ pay to test results, which would be fine for the few schools that have happy healthy kids from good families with good income as the main student body, not so good for 90% of the rest of the public school teachers.

My wife and I are with the teachers on this one. We can solve many of our money problems in Chicago by using our secret TIF money. We have to pay the teachers what was promised them, our word shouldn’t just be good to other countries.

Chicago friends, correct me where I’ve missed something or got it wrong. And if you want to share this, go for it.

35 thoughts on “A Chicago taxpayer talks about the possible teacher strike.” 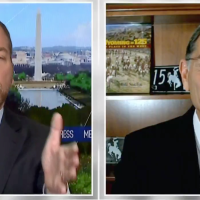 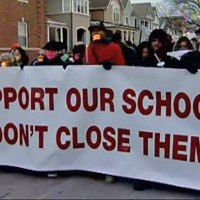